Before you go out tonight, read this.

March 31, 2012
Dr. Annabelle R. Charbit, author of A Life Lived Ridiculously, is back to share tips on how to avoid falling prey to sociopaths. This is the best pre-Saturday night advice you're gonna get, so read, remember, and don't be affraid to judge others when you're out schmoozing and co-mingling tonight. Feel free, in fact, to print this out in case you need a reminder later.

Caution: If too much alchohol is consumed, give said article away so as to avoid an awkward tattoo chalk full of sociopath warnings that may become a problem in future relationships.

But seriously, empowering yourself with knowledge (for any situation) can help you avoid the many forms of danger -especially if it comes in the form of a very attractive individual with nice hair and all the right moves.

Okay, I'll zip it now and turn the blog over to Annabelle's article:

There are people in the world who don't care about love, and who feel no remorse, empathy or emotional attachment to others. They don't even know what these feeling are. These people are called sociopaths. Most people think of a sociopath as a deranged serial killer, but, with 4% of the population having the character traits of a sociopath, most sociopaths never physically harm anyone. Sociopaths do however ruin lives, empty bank accounts, and cause untold emotional trauma, using simply the fact that they don't care.

WHAT MAKES A SOCIOPATH?

The Absence of Feelings: Sociopaths may seem to laugh or cry but they present with no depth of emotion. While easily provoked to frustration or rage, their display of feeling is little more than a momentary, isolated temper tantrum. To the sociopath, other people are tools to  get them what they want: money, sex, a job or other possessions. They live in their own amoral world where nothing they do has any consequences and where they owe no one anything. They have no empathy. Thus, they elude all responsibility for their actions, and can easily turn the tables, blaming their partner without guilt or shame.

The Relentlessness of Deception: Sociopaths lie all the time. As they don't view their spouse as a thinking, feeling person, they do not see this behavior as wrong. Their only quest is to serve themselves and, if this entails lying, cheating or even murder, they will do so. If one catches them in lies, they are brilliant at changing the subject, placing the onus on the other person, denying their involvement or trying to make their spouse seem crazy. They are even good at deceiving the police and the court system; sociopaths rarely end up in prison for their actions.
The Impulsiveness of Action: Sociopathic individuals rarely plan ahead. They undertake actions on the basis of momentary whims, often devious ones. Every act seems isolated in its own amoral universe. Thus, they cannot keep promises or repair the damage they've caused to others. When they lie, cheat or steal, the act exists solely for them; they believe it should have no repercussions or real world effects. They often appear to have "forgotten" they did something shortly after it happened. Their need for excitement encourages them to get involved in one night stands, shady deals and ill advised engagements. Sociopaths have no sense of commitment to their spouses, any children they may have together or the future.

HOW TO SPOT A SOCIOPATH

Sociopaths have impressive social skills, thereby making them extremely hard to spot. They are charming, funny and exciting. This is why we need to be aware. If your new romantic interest exhibits all or most of the following behaviors, be careful. He or she might be a sociopath.

1) Charisma and charm: They’re smooth talkers, always have an answer, never miss a beat. They seem to be very exciting. Their manners are impeccable; they are well groomed; they fulfill the codes of romance and courtship to a tee. They are likely to be eloquent talkers who lace their speech with impressive sounding facts and figures. They may be fun, laugh a lot, sweep their partner off their feet with their sweetness.

2) Enormous ego: They act like the smartest, richest or most successful people around. They may actually come out and tell you that.

3) Overly attentive: They call, text and e-mail constantly. They want to be with you every moment. They resent time you spend with your family and  friends.

5) Blame others: Nothing is ever their fault. They always have an excuse. Someone else causes their problems.

6) Lies and gaps in the story: You ask questions, and the answers are vague. They tell stupid lies. They tell outrageous lies. They lie when they’d make out better telling the truth. If you probe deeper, you’ll find that their stories never stack up.

7) Intense eye contact: Call it the predatory stare. If you get a chill down your spine when they look at you, pay attention.

8) Move fast: They quickly proclaim that you’re their true love and soul mate. They want to move in together or get married quickly.

9) Pity play: They appeal to your sympathy. They want you to feel sorry for their abusive childhood, psychotic ex, incurable disease or financial setbacks.

10) Sexual magnetism: If you feel intense attraction, if your physical relationship is unbelievable, it may be their excess testosterone.

Some doctors call them sociopaths, others refer to them as psychopaths. Either way, the terms are used to describe individuals who have a range of personality disorders. These people are NOT certifiably mentally ill; they are biological carriers of socially and personally problematic traits. Such traits may have been manifested from childhood in acts of cruelty to animals, property or people. These characteristics can disrupt relationships, create financial and emotional crises, and, at their worst, lead the person to callously undertake acts of vandalism, theft, rape or murder. Being aware what constitutes a sociopath can help one resist their charm and the errors inherent in establishing a life with them.

Sociopaths know exactly what they are doing, and most of them never kill anyone. But they are social predators who exploit just about everyone they meet. They have no heart, no conscience and no remorse.

You can’t ‘cure’ a sociopath or help them to see the error of their ways. They don't see the world as we do, so the only thing you can do, is save yourself and walk away.


Author of A Life Lived Ridiculously: When a girl with obsessive compulsive disorder falls in love with a sociopath, she must fight for her sanity and her life 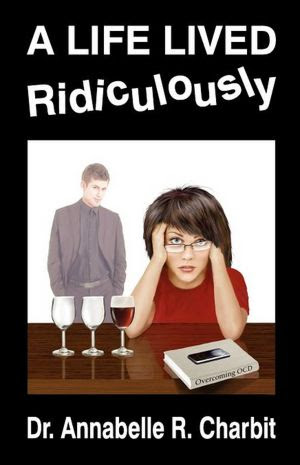 Buy A Life Lived Ridiculously at Amazon
Buy A Life Lived Ridiculously at Barnes and Noble
Synopsis
Maxine's brain is stuck. Everything around her feels wrong and the only way to fix it is to check, double-check, rearrange and count everything. What Maxine can't fix though is her parents' constant nagging over the absence of a husband. A humiliation that is further compounded when her younger brother runs off with Miss Perfect. Then she meets Sam, a smooth-talking charmer with the weight of the world on his shoulders, and enough terminal diseases to wipe out a small village. Maxine decides that Sam is her salvation, never mind that his life is more depressing than a Greek tragedy, and others are urging her to get away from him. The problem is that Sam has Maxine under his spell. Will Maxine escape from Sam before it is too late?


Thank you, Annabelle! This has been quite interesting. And A Life Lived Ridiculously is absolutely amazing!!! This book is for anyone in search of a great plot, unforgetable characters, and a good laugh.

Popular posts from this blog

It Lurks In The Shadows

February 02, 2020
Sinner, debuting February 28th, 2020, is a memorable vampire tale that will pick at your phobias like a dying fingernail. It's campy and fun and gory as hell. The characters will leave their marks on you with kickass one-liners and realistic, lovable qualities. You will want to keep reading even as your brain is screaming, "Bad eyeballs! No more!" But Sinner addresses some serious issues. It truly is 'fiction with meaning.' Honestly, it was tough to write, at times. Loss/grief, addiction/overdose, depression, and an anxiety disorder draw readers into Alice's complex existence. She is afflicted. She's suffering. She fears she's losing her mind. And not for the reasons you might think. Grief is something most of us can relate to, and it is reflected in Alice's character. Grief is a twisted thing because it tricks you. It's never the same. One day, you feel like you ripped your heart out and lost it in your purse somewhere, and the next d
Read more

A New Book Is Coming Your Way

September 15, 2019
The Hope & Darkness Series-  Post-Apocalyptic New Adult Romance Book One: UPON US When the future of mankind is threatened by an ailing planet and insatiable human advancement, world governments agree to ban the modern way of life, cutting off electricity, technology, and medical services, dismantling the global economy for one hundred years. To say they were desperate is an understatement.  The world is twenty-five-years deep into this self-imposed darkness known as the New Beginning. In the early days, the bureaucrats raced to the cities turned villages. Everyone else de-evolved into small clans, hoping to ward off illness and reduce violence. Incidentally, a mysterious pandemic has been turning the sick into zombie-like beings, eating away their flesh and minds until nothing is left.  The survivors are facing a new danger: starvation. But hope lives anywhere darkness blooms, and each day the truth grows closer, as hideous as it may be.  Through
Read more

February 29, 2020
Sinner is now available in print and e-book exclusively on Amazon.  E-book sale:  $0.99 thru Sunday. Vampires wreak havoc in Texas. " Sinner is a fabulous vampire read that you won't be able to put down." ~Goodreads Reviewer   " This book is Alice's journey through the underbelly of her hometown and the creatures that exist there. I love that it shows her point of view from becoming a vampire and her will to not only survive it but to embrace it." ~Amazon Reviewer Alice's life is spiraling out of control. After an accident leads to a tainted blood transfusion, Alice descends into the addictive underworld of vampires. Only, she isn't alone. Something stalks her from beyond. With no sire or formal keeper, Alice is among the feral vampires, marked by white eyes and the ability to live without drinking blood, unless the cravings prevail. Caught between two rivals, Alice doesn't know what she wants to be, a sinner or a
Read more